"Welcome to everyone to 123 Slaughter Me Street 2.

In this exciting prequel to the hit game "123 Slaughter Me Street", we find out the deep dark secrets that lead up to the madness of this series.

You find yourself confused with blood on your hands in a dark house with only a flashlight to guide you.

As clarity and cognizance begins to set in, the confusing haze you were feeling was almost a comfort compared to the harsh reality, that you... are not.

The air is putrid, and all you can feel are the eyes of the dead upon you. When there is nowhere to run, all you can do is hide, but what is safe?

When your inspiration comes from the other side, eventually you have to pay the piper.

In this deadly game of "Hide and Seek" you must stealthily fill your "Hide Meter" while evading your nemesis, and using your light for finding areas of refuge. Can you survive these ten deadly levels of pure adrenaline rushing terror?" And during all this,

The Revenge gets revenge.

The player must survive a house without being attacked by of any of the puppets that wander around the house while playing a deadly game of hide and seek. Unlike in the first game, now the player can roam freely around, crouch, and sprint. On the upper screen, there's a phase that represents each level.The "Pre-game" phase is a good time for the player to explore the house and build a good strategy. The player has a flashlight to illuminate the darkened spots, and an odd blue light or green light will appear on a spot when the flashlight is on. The blue light is a hiding spot and the green light is a safe spot, although the player cannot use the hiding spot or safe spot until pre-game is over. Once pre-game ends, the phase will change to "hide". The eye icon on the lower right side of the screen will be an open white eye when the player is out in the open that will close when the player is in a hiding spot or a safe spot and will turn red when a puppet sees the player, which means that the player must quickly hide.

The game consists of ten levels, increasing in difficulty with eight hidden medals on each level. Completing all ten levels will unlock "Survival", which tests how long the player can survive evading the puppets with a timer on the lower left side of the screen. 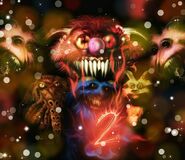 A promotional teaser for the game.

Ditto, now featuring the puppets of the game: The Screamer, The Seeker, The Nightmare (in his previous form), and The Greeter (Revenge).
Add a photo to this gallery
Retrieved from "https://1-2-3-slaughter-me-street.fandom.com/wiki/123_Slaughter_Me_Street_2?oldid=9864"
Community content is available under CC-BY-SA unless otherwise noted.