Welcome everyone to 123 Slaughter Me Street!

You're a criminal on the run, and you find yourself evading police as you make your escape down an alley. You see an old fire escape and scramble up to the roof of an abandoned building; you are safe here.

As the patrol cars drive past, you slip into the shadows. The coast is clear, you just got away with it... or did you?

On your way back towards the fire escape, the roof gives out from under you and you plummet into the darkness. You are wounded and equipped only with a dying flashlight. Where are you? Do you belong here? Perhaps not. You must now escape this building.

A twisted ankle and a busted flashlight in the middle of a man's great casualty of progress. This is the price you will pay for avoiding the police.

It smells of death here; the stench of frustration, success and the festering of old hopes. A shuffling rises up from the infinite darkness before you.

Rats? No, too big for rats.

All because of what you did.

The player's goal is to survive and escape the abandoned apartment complex from the puppets, which lurk in the corridors. On each floor, the player must walk forward to reach the door in end of the hallway, which leads the player carefully down the stairs and completes the floor. The player can also use the flashlight to stun the puppets.

There are seven challenging floors and three puppets who have distinct behaviors. The hallway most notably has empty doorways directly to the left and right of the player. The player cannot walk backwards, but can check behind and look inside the doorways to check for puppets. Use of these actions consume the player's rusty flashlight; If the player walks through a darkened stairs without using the flashlight, The Follower will appear out of nowhere and attack the player.

There are five hidden Relics on each floor in the game. The player can collect them by simply using the flashlight. 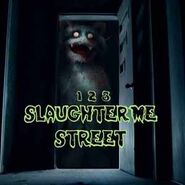 The header on the 123 Slaughter Me Street Steam page.

Add a photo to this gallery
Retrieved from "https://1-2-3-slaughter-me-street.fandom.com/wiki/123_Slaughter_Me_Street?oldid=9898"
Community content is available under CC-BY-SA unless otherwise noted.